Okay, Maybe You Should Copy This One Billionaire Did you get a chance to read my most recent blog? It was all about the time management strategies that some of the world’s billionaires share, and how many powerful people including Elon Musk and Alan Greenspan schedule their days so carefully that every minute is accounted for. I shared that I think it’s valuable to learn about the systems that successful people use, but I also warned my readers to be careful what they copy. What works for Elon Musk won’t necessarily work for you.

He meant it. When Buffett and Gates later went on “Charlie Rose,” Gates described having seen how empty Buffett’s calendar was. The “Oracle of Omaha” actually handed his pocket calendar over to the show host, who confirmed that entire days were empty. During one week in April, he noted, Buffett only had three things scheduled.

Gates was initially shocked by this. As a fellow CEO, his own schedule was packed. But seeing how Buffett limited his engagements struck a chord with Gates. In that same interview, he said something that I think is really wise:

“It’s not a proxy of your seriousness that you’ve filled every minute in your schedule.”

Wow. That’s powerful, isn’t it? We all compare ourselves to others, and so sometimes it feels like we’re competing to see who’s busiest, who’s most in demand. If a stranger were to see your jam-packed schedule, would they assume you were a high-powered person who was at the top of your game? Maybe… but they wouldn’t necessarily be correct. You could have a schedule that’s stuffed with meetings, conference calls, deadlines and reminders and still be really struggling with your time management and with your life/work balance.

But ask yourself this:

I know what you might be thinking. Warren Buffett gets to say no to requests for his time. Your boss or clients won’t be too thrilled if you start turning down invitations to meetings. Few of us can really say no to the things we’re asked to do. But could you say no to some of the requests that come your way, if it meant giving yourself more space to accomplish the things that really matter?

What’s more overwhelming than staring at a packed schedule and wondering how you’ll ever get it all done?

Beating overwhelm is also what I’ll be talking about during my upcoming webinar. I hope you’ll join me on

How to Tame Overwhelm and Get Stuff Done

If just the idea of getting more stuff done fills you with relief, this webinar is for you. To get more information and enroll in this free session, click here!

In the meantime, look for opportunities to say no! You’re in the right place if you’re ready to gain control of how you spend your time — and bring more meaning into your life.

Looking to get a grip on your time? Start now by registering for our Free Training. Grab your seat here! 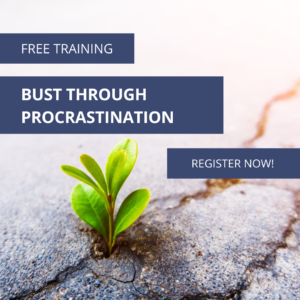